Tapico aspires to follow the guiding principle of API Evolution:

API Evolution is the concept of never breaking your contracts until you absolutely absolutely have to, then when you do you manage that change with sensible warnings to clients. It is not about making arbitrary changes and breaking stuff.

Where possible we will endeavour to make changes in a manner that is additive and/or backwards compatible.

In the exceptional circumstances where a breaking change is introduced to the Tapico API, a new dated version is released. To avoid breaking your code, we don’t change your version until you’re ready to upgrade.

We have a deprecation policy to ensure consuming applications are duly notified and given sufficient opportunity to adapt to these changes.

Tapico utilise date-named versions that correspond to our API changelog and the date in which the changes were released (e.g. 2021-09-04).

You may also notice a path fragment in the Tapico API URIs, e.g. v1 in https://sandbox.tapico.io/api/v1/payment-instructions.

We have no plans to make use of path-based versioning, but have incorporated it from the outset to avoid disruption to applications should we wish to utilise it in the future. Any such plans will be communicated well in advance and we will consult our community before proceeding with such a change.

Versions are only incremented in response to breaking API changes.

There's two mechanisms for controlling the selected API version if you need to change it from the default:

Applications can select the default API version in the application wizard, specifically in the “Open Wealth” section, which becomes available after subscribing to the Open Wealth Service Pack. 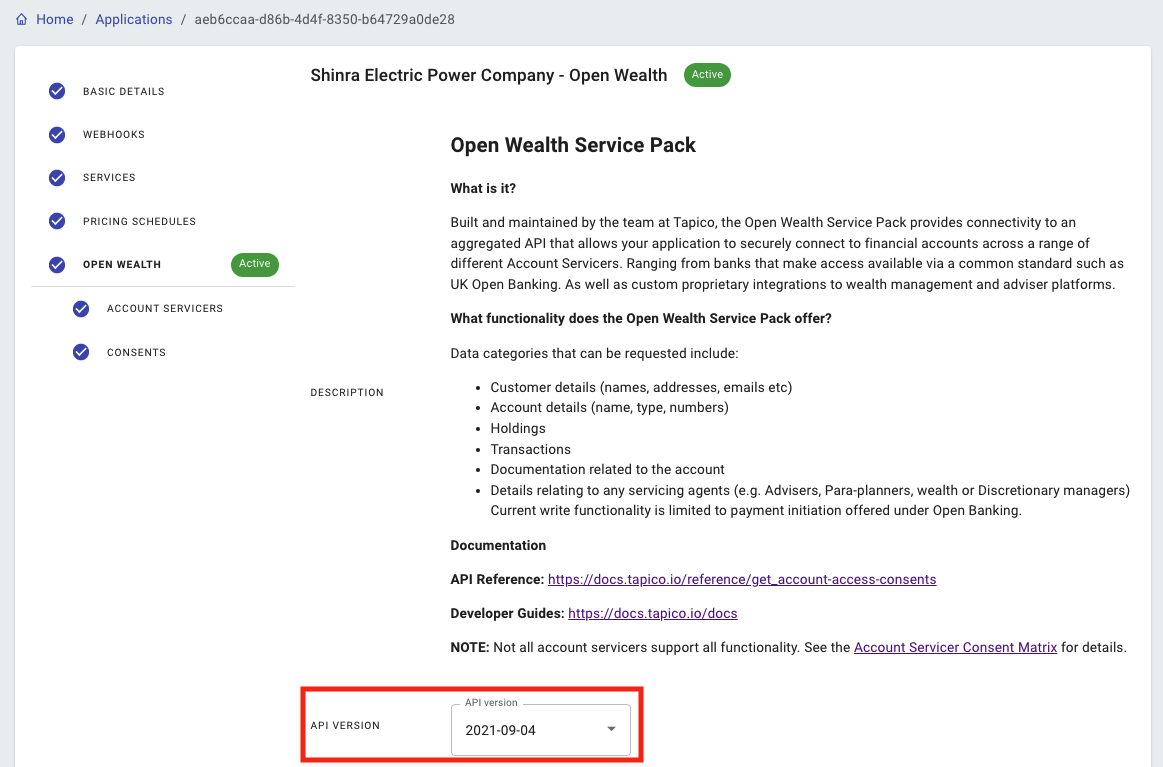 This is the version that takes effect in the absence of an explicit selection via Tapico-Version HTTP request header.

Applications may optionally send an HTTP Header Tapico-Version in their requests to specify the API version on a per-request basis. Check out our API changelog for a list of valid versions.

Doing so will override the default application version for that particular request and provides some flexibility for applications to employ incremental or divergent upgrade paths for the different APIs it consumes.

Tapico will continue support for deprecated APIs or API components (fields, parameters etc.) for at least 6 months from the point of announcement.

Deprecations will be notified via our changelog, and also labelled in our Open API spec via the deprecated keyword.

These API docs themselves will also be versioned when a breaking change is introduced into the Tapico API. In the top left hand corner is a version drop down which can be used to swap to older versions of the API docs/guides.